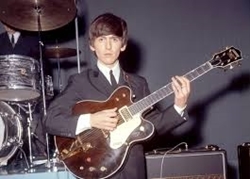 George Harrison was so often called the ‘quiet Beatle’, but his story is remarkable both for his creative achievements, social conscience and influence.

1. George loved the guitar even before he learned to play, or owned one. He used to draw pictures of the instrument as a young boy. His father Harold – yes that’s Harry Harrison – bought George a Dutch Egmond Toledo 105/0 flat-top acoustic guitar in 1956. It cost just over three pounds. That’s £90 in today’s money. A fan of skiffle legend Lonnie Donegan’s music, George formed a skiffle group called the Rebels, with his brother and a friend.