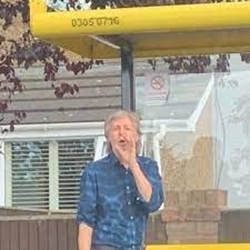 A Liverpool dad has revealed how he chatted to Sir Paul McCartney about their old school after he spotted his hero standing at a bus stop in the Heswall area of Wirral.

Beatles fan Colin Newitt, 52, was driving his family back home to South Liverpool on Saturday afternoon when they saw him as they were stopped at traffic lights.

Colin said "I wound the window down and shouted 'Paul'. He shouted back 'You alright?".