Do The Beatles Have a Christmas Song or Holiday Album? 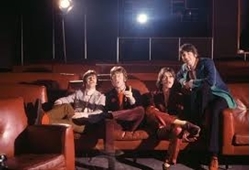 The Beatles were an English rock band that formed in Liverpool and went on to completely change the course of popular music. Although the group broke up over forty years ago, fans still love and obsess over the band and the music they wrote still resonates with people today. From soft-rock hits like “Strawberry Fields” and “Lucy in the Sky with Diamonds” to sweet ballads like “Hey Jude,” there is a Beatles song for every occasion.

The Beatles even have some holiday hits to jam to, although they never achieved the level of success that some of their other songs did. Although not even the most devout Beatles fan may know what the band did especially for the holidays each year that was a special treat just for their fan club.
The Beatles spent their early years as a band playing clubs around Liverpool. Paul McCartney, John Lennon, George Harrison, and Ringo Starr had what it took to make it big and after their first big hit, “Love Me Do,” debuted on the airwaves. It was only a few short years until they achieved worldwide stardom. By 1964, the Beatles were the biggest stars in the world and led what became known as the “British Invasion” of English pop artists on the United States music charts.