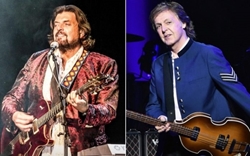 Alan Parsons, the studio engineer and the former producer of Pink Floyd, recalled the times when he worked with The Beatles and revealed that Paul McCartney was a pretty demanding musician on the recent interview he gave to Sweetwater.

Parsons talked about the first years in his career when he began to work as an assistant engineer on the 1969 album ‘Abbey Road‘ and 1970’s ‘Let It Be‘ of The Beatles. He explained that he continued to work with Paul McCartney and got used to his working style, which was tough.

Alan Parsons, who has worked in 1973 with Pink Floyd on ‘The Dark Side of the Moon‘, mentioned the creation process of ‘Abbey Road’ when he got to know McCartney better. He said:

“Well, yes. As a result of working on the ‘Abbey Road’ album, at least half the time they were there making it, but I got to know Paul a bit better.