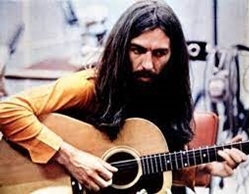 English musician George Harrison found fame as one-fourth of the legendary rock band the Beatles. With John Lennon, Paul McCartney, and Ringo Starr, the Fab Four’s lead guitarist led the British Invasion of America and shot to superstardom. Along the way, he penned hits such as “Here Comes the Sun,” “Something,” and “While My Guitar Gently Weeps.”

After the Beatles broke up in 1970, Harrison embarked on a successful solo career. The performer/songwriter recorded popular tunes like “My Sweet Lord,” “All Things Must Pass,” and “Got My Mind Set on You.” He also collaborated with music industry greats, including Ravi Shankar on the Grammy-winning live album The Concert for Bangladesh and Bob Dylan, Tom Petty, Jeff Lynne, and Roy Orbison in the supergroup the Traveling Wilburys.