George Harrison Said Getting a Good Performance out of a 'Pissed off' Sean Penn for ... 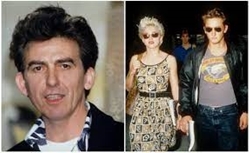 George Harrison co-founded HandMade Films in 1978 with his business manager, Denis O’Brien, to help his Monty Python friends make Life of Brian. However, neither George nor O’Brien imagined that they’d make a film that scored two Hollywood A-Listers, Madonna and her then-husband Sean Penn.

Shanghai Surprise was not HandMade Films’ best movie, though. Quite the opposite. George said getting a good performance out of an often pissed-off Penn was hard.
In a 1988 interview, Film Comment asked George why he and HandMade Films agreed to make Shanghai Surprise. The film had a $15 million budget and a “temperamental, high-profile husband-and-wife team.”