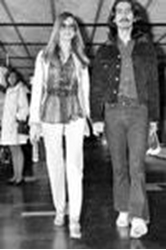 When it came to his style, the Beatles' George Harrison was no stranger to trying something new. With a penchant for pinstripe suits, form-fitting denim dungarees and flamboyant ruffle necks, you name it, Harrison gave it whirl.

That being said, one thing that stuck for the late musician was his footwear. When not in black leather Chelsea boots, Harrison was the purveyor of Converse Jack Purcell sneakers, among other Converse designs.

Whether it was their famed 1969 performance on the rooftop of their Apple Corps headquarters or when photographed with his wife, Pattie Boyd, on their way to Nice in the same year, Harrison favoured the shoe's mighty silhouette.
Canadian-born Olympian Jack Purcell was World Badminton Champion in the 1930s and he partnered with the BF Goodrich Company of Canada to create on-court kicks that would help him maintain his positioning. The trainers, which were characterised by the signature “smile” on the vulcanised toe piece, came to fruition in 1935 and featured a moulded non-skid outsole, an extra-thick spongey sole and PF wedge in the heel that works to take strain away from leg muscles.