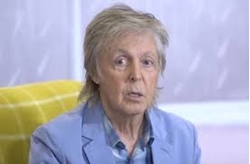 The Walrus himself, Sir Paul McCartney, was recently interviewed by BBC Radio 4’s Sarah Montague. When Montague took McCartney to task over Coldplay’s recent decision to mercifully stop touring due to their awareness of the band’s own “carbon footprint”, McCartney reassured Sarah that he has no plans to do the same. Paul McCarney ‘refuses’ listening to John Lennon songs.

“I am aware of [his carbon footprint], and you do your best. But, it is very difficult if you’re going to tour. I AM going to go on tour in America. You can’t say… ‘we’ll go by Greyhound Bus,’ because that’s just as bad! We certainly can’t just bike our way around. It’s a reality, you just have to do it, and plant a lot of trees… that’s kind of how I offset it, is by doing things that will make up for it. If I tour, that’s going to involve travel, which is going to involve a carbon footprint.”