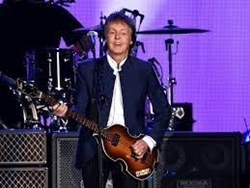 One of Paul McCartney’s songs drew inspiration from someone he disliked. He compared the song to a track from The Beatles’ Abbey Road. The more recent tune appeared on a hit album.

Many Paul McCartney songs are about fictional characters. For example, one of his more recent tracks is about a woman who looks like a “harlot.” Paul revealed he drew inspiration from real life while writing the song but he’s never going to name who inspired it.