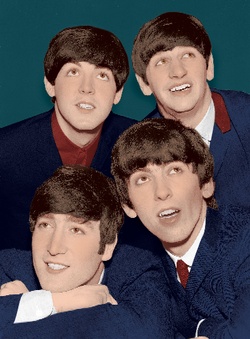 At the pressconference at JFK airport, on virgin soil, they do their by-now fully developed thing: four mouths in a row, four bobbing heads, four sets of speculative-aggressive eyes. Unnerving polyphonic comedy. The atmosphere in the room is boisterous, the questions fatuous. How much money do you expect to take out of this country?

How many are bald, if you have to wear those wigs? Are you for real? “Come and have a feel.” That could only be John: the spark-jump into rhyme, the louche challenge. George, meanwhile, looking darkly French as he sometimes does, is warding off idiot black magic with a totemic cigarette. Two days later they’re onThe Ed Sullivan Show, the Beatles in black and white, glimmering weirdly. Paul and George are sexual stick men; John, bandy-legged rock-and-roll portal, is meatier, bouncing on shit-kicker thighs; Ringo, the absurdist Beatle, syncopates his hair and stirs his drum kit with a distant smile, as if resigned and reconciled already to the madness. And spreading away from these four men, continent-wide, a conflagration of screams. It’s been 50 years since the switch was flipped on American Beatlemania—perhaps the purest Beatlemania there ever was, certainly the most virulent—and torrents of analysis commemorate the occasion.