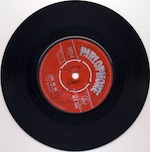 According to the Beatles memorabilia dealer who sold the album, this is; "One of the most historic signed records there is! A fully signed 1962 first issue "Love Me Do / P.S. I Love You" 45 signed by all four Beatles on the a side of the record!

All have signed in dark blue ballpoint pen! This record was signed on October 6, 1962 at Dawson's music shop in Widnes, England one day after the 45 was issued!" Rare Beatles items are among some of the hottest collectibles in the marketplace today, often fetching staggering amounts. Having this particular record personally signed by all four band members, early in their career, adds to the records rarity. Because there just aren't that many fully-signed early (Beatles) items available. Rarity creates desirability for collectors, and desirability can push prices sky-high. Earlier this year (March, 2013) a rare signed copy of The Beatles - Sgt. Pepper's Lonely Hearts Club Band (1967), sold for $290,500. Setting a new world record for the most expensive record sold at that time.