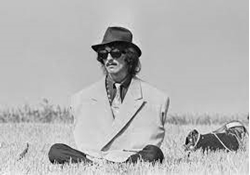 George Harrison had friends in strange places. He was friends with Formula One race car drivers and the comedians in Monty Python. It just proves how charismatic George was. But another group welcomed George that many fans probably don’t know about, the Hells Angels. Can you picture George Harrison hanging out with one of the most intimidating biker gangs?

However, George was friendly with them and told them to visit him if they ever visited England. He probably didn’t expect to be taken up on the offer. He also probably didn’t think the gang would set up camp at Apple Records either.