Under the Volcano: A breezy, gossipy, but nicely grounded doco on AIR Montserrat 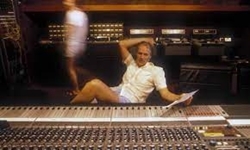 Producer and arranger George Martin had been the true “fifth Beatle”.

He had taken his background in performance and arrangement and brought to The Beatles ways of making a recording studio respond that had never been properly explored before. Martin made the Beatles into a better band, and they, in turn, made Martin into a greater producer and arranger than he might otherwise have become.

But, by the end of the 1960s, Martin and everybody around him needed a break, from the work – and each other.

The Police’s Andy Summers, Sting, Stewart Copeland recorded two albums at AIR Montserrat, despite barely being able to be in the same room as each other.