What If The Beatles Didn't Break Up? Imagining Their 'Next' Album 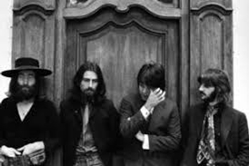 One of the most entertaining hypotheticals for Beatles’ fans to discuss is what the Beatles would have sounded like or recorded if they had stayed together after the release of Let It Be.* In a sense, this is an even more fruitless counterfactual than another popular one: What songs would have been on The White Album if it hadn’t been a double album (which I have already covered). Unlike the case of that what-if, the songs the Beatles would have done together were never released as Beatles songs. And to imagine the Beatles staying together after 1970 is to wish away the centrifugal forces that had by that point already largely torn the four musical titans at the band’s center apart.**

But Beatles’ fans such as myself speculate nonetheless, aided by morsels such as collaborations between members after the break-up (most notably in the almost-Beatles song “I’m the Greatest!”), and demos of songs that later became solo work but were conceived or sometimes even recorded while the Beatles were still together (e.g., much of George Harrison’s first post-Beatle solo album, All Things Must Pass).