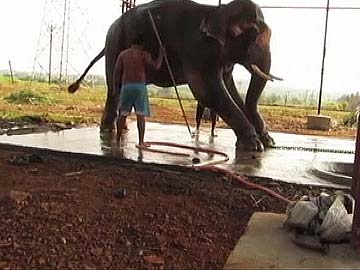 The walk to freedom for Sunder, a 13-year-old elephant who has been in captivity, could be delayed further. MLA Vinay Kore, who has been resisting Sunder's release, has now filed an appeal against it in the Supreme Court.

The Bombay High Court had on April 7 ordered authorities to implement a state government order, issued in August 2012, to release Sunder into the wild. The People for Ethical Treatment of Animals (PETA) has been fighting to secure the pachyderm's release and had moved the Bombay High Court as the state government's order to release him had not been implemented. Sunder who has been in captivity and was kept chained inside a dark shed at a Temple in the Kolhapur district of Maharashtra for seven years would have been finally free from the torture. PETA India's Director of Veterinary Affairs Dr Manilal Valliyate told NDTV, "This is an attempt from MLA Vinay Kore to delay the process of implementing the High Court order. All the paperwork from moving Sunder to a sanctuary in Bangalore is almost complete. We are hoping that Sunder will be moved soon and the Supreme Court will give us a favourable order."