A night in the life of a busy Beatles tribute band 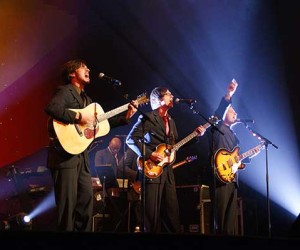 Every once in a long while, the members of Yesterday and Today get a request they can’t bring themselves to play. It’s not for lack of knowledge or enthusiasm. The six members of the Beatles cover band that’s set to hit the Lone Tree Arts Center this week have a working knowledge of the Fab Four’s entire catalogue.

The group based out of Nebraska have mastered tunes off of early records like “A Hard Day’s Night,” the Beatles’ final songs on albums like “Abbey Road” and everything in between. But the group has had to draw the line on rare occasions since they launched as an all-request cover band. “‘Revolution 9’ on the White Album; people request that to be a smartass,” said Billy McGuigan, a founding member of Yesterday and Today, as well as its guitarist, keyboard player and vocalist. That tune, an eight-minute sound experiment on the Beatles’ 1968 album that features Ringo Starr repeatedly droning the words “number nine,” would hardly make for a crowd-pleasing musical experience. “There are probably a group of three or four songs that five people might like to hear out of an audience of 1,000.”