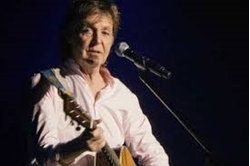 One summer day in 1968, Paul McCartney recorded “Blackbird” while John Lennon looped tape for “Revolution 9” in another studio. Though these tracks sound about as similar as Sting and Stravinsky, they ended up on the same album—the Beatles’ self-titled double album (aka the “White Album”).

McCartney’s unusual fingerpick-and-strum technique gives “Blackbird” its distinctive sound. Try strumming across the strings with just your index finger and you’ll get a sense of McCartney’s feel. Unlike a strum that uses your whole arm, these mini-strums are all done with your hand in the same place: your index finger moves from the base knuckle joining your finger to your hand.

Look at the first measure of “Blackbird” and see that McCartney grabs each note of the tenth intervals on the beat with his thumb and middle finger, filling in the upbeats with index-finger plucks. In measure 2, he slides all the way up to the tenth and 12th frets, grabs two strings again with his thumb and index finger, and does a quick index-finger strum—down and up—on the second half of beat 1.