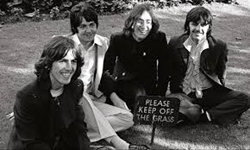 Perhaps one of the weirdest moments on the latest Beatles remix-and-outtakes collection is a bit where the boys have just crapped out on a take of “Maxwell's Silver Hammer,” and, as Paul McCartney requests another attempt at the song, George Harrison references — of all bands — the MC5. “'Kick Out the Jams,' take eight,” Harrison jokes. Ringo Starr then screams “Brothers and sisters!” like Wayne Kramer and starts wailing on the snare drum.

A couple things. One, that The Beatles were aware of the MC5 seems strange, even though it's evident from this tape that they were. It's funny somehow to picture Starr and Harrison getting into the radical left-wing proto-punk MC5 around the same time they were making “Abbey Road,” but there it is. Another thing is, you get the distinct sense that they'd rather be making gritty rock than subjecting themselves to another grueling session where McCartney made them play another of his fluffy tunes 50 times.