An Excerpt From 'My Ticket to Ride: How I Ran Away to England to Meet the Beatles and Got ... 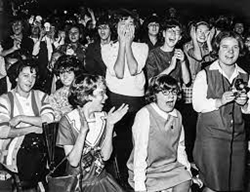 In 1964, millions of girls daydreamed about running off to England in search of the Beatles. Two 16-year-old girls from Cleveland Heights actually did it. Janice Hawkins (now Janice Mitchell) was one of them. Her new book, My Ticket To Ride: How I Ran Away to England to Meet the Beatles and Got Rock and Roll Banned in Cleveland gives a firsthand account of her adventure — and of the early days of Beatlemania.

Mitchell was bit by the Beatlemania bug from the moment she first heard “I Want To Hold Your Hand” on Cleveland radio station KYW in December 1963. But listening to the Beatles’ records, reading about them in magazines and even seeing them in concert wasn’t enough. She wanted to live in their world. Janice’s own life, in an unhappy home with a legal guardian who seemed to resent her, was deeply unhappy. To her, the Beatles sounded like freedom.