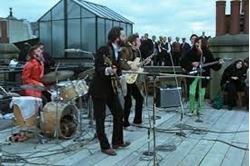 The Beatles’ full rooftop concert at their Apple Corps headquarters in London will get a special limited theatrical release in IMAX later this month. The 60-minute feature will fittingly premiere Jan. 30, 53 years to the day after the Beatles staged their famous final public performance.

The Beatles: Get Back – The Rooftop Concert is tied to Peter Jackson’s acclaimed three-part documentary Get Back on Disney+ (while the full concert is already featured in the film, the footage and audio will be remastered and optimized for IMAX). Following the concert film, Jackson will participate in a special Q&A session, which will be broadcast via satellite to all participating IMAX theaters.