Everybody loves the Beatles. That's the first thought that came to Slidell artist Lori Gomez's mind as she tried to come up with a theme to transform a century-old, donated piano into a work of art.

The piano would be auctioned to help raise money to build veterans' homes in east St Tammany Parish, and so Gomez set about refurbishing and then painting the  colorful Beatles artwork onto it.

But two final touches have made the upright, antique piano more rare and valuable than anyone involved in the upcoming auction ever imagined: personal autographs by both Ringo Starr and Sir Paul McCartney, the only two surviving members of The Beatles.

"I had no idea it would turn into this," Gomez said. 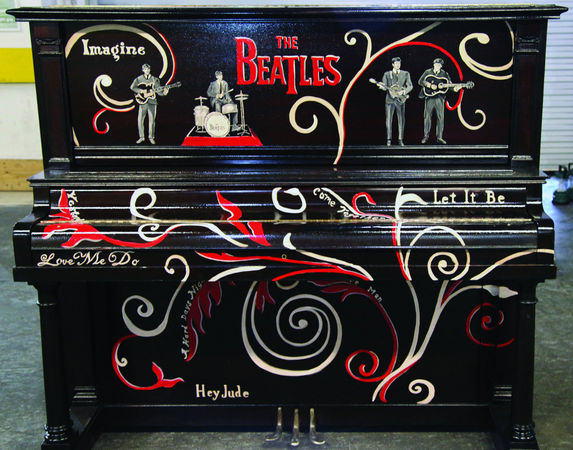 In a tale of destiny, aided by a good deal of persistence, Kim Bergeron, an art auction committee member for the East St. Tammany Habitat for Humanity, sought to have the piano autographed in time for the organization's "Home is Where Art Is" gala on Nov. 21. Proceeds from the seventh annual event will go toward building homes for veterans, a key factor in helping Bergeron obtain the signatures.

She first reached out to McCartney, who performed in New Orleans Oct. 11. Then, after hearing from her friend Amy Kaussman that Starr had a tour stop at the Hard Rock Hotel & Casino in Biloxi, Bergeron contacted his representatives on Oct. 17.

The fairy tale started in August when Gomez got the deteriorated piano -- a family heirloom donated to the East St. Tammany Habitat For Humanity by Ethel Knight of Picayune, Miss. – and began working to make it playable again.

The piano originally was purchased in Biloxi by Knight's great-great grandmother.

"So for (Starr) to have signed it in Biloxi, it just comes full circle," Bergeron said, adding that Knight is "over the moon" with excitement.

"It was a family heirloom, and when she found out what the purpose would be, she was happy to help a veteran out."

With a little help from a friend (musician Barney Floyd), Gomez and her husband, Mike, spent more than 300 hours taking the piano apart, putting it back together and tuning it before she added the Beatles artwork.

Gomez chose shades of gray, white and red for the mahogany piano, whose dark background represented the black tones the artist wanted to portray. Titles of Beatles' songs come off the swirling vines, and portraits of the band members are painted across the upper portion, along with the band's logo. The only bit of bright color is found on the piano's back, where Gomez painted a yellow submarine.

Painting the portraits was the most difficult part of the project, Gomez said. The faces are only about an inch in size and required more than 13 hours of her time to get them correct.

While Gomez worked on the piano, Bergeron focused on obtaining the autographs.

"I went through multiple angles. Anyone who had any connection to them, I e-mailed them. When that wasn't successful, I decided to take a more public approach and try and get community support," she said.

She even created a blog about her efforts entitled "Right Brain Diaries." Her petitions were declined at first because of the sheer number of charitable requests the music legends receive. But Bergeron's efforts finally paid off when Starr agreed to sign the piano in Biloxi.

She couldn't get an agreement that McCartney would sign it before his New Orleans show, but his representatives contacted her and told her that if the piano could be brought to Louisville, Ky., he'd autograph it there.

She chalks the experience up to destiny and to researching the passions of the musicians and their connections before she e-mailed them.

"It was basically finding out what was important to them, and it was basically a lot of the same things that are important to Habitat," Bergeron said. "Everything just lined up perfectly to where we were supposed to do this. I have no doubt....It's a very humbling experience and an incredible honor for them to have said yes."

It also was quite an experience to get the piano to Louisville for McCartney's autograph. What was supposed to be a 10-hour trip for Bergeron, Gomez, East St. Tammany Habitat For Humanity Executive Director Debbie Crouch and truck driver Eric Jones turned into 29 hours on the road. A tank full of bad diesel fuel caused Habitat's truck to break down multiple times, but thanks to assistance from multiple people along the way, the group and the piano finally made it to McCartney.

Now that the piano has both autographs, Habitat is waiting to have it appraised and for permission from McCartney's representatives to auction it nationally. "He likes to be very quiet about his philanthropic efforts," Bergeron said. "Before we go national, we want to be 100 percent respectful of his wishes."

Crouch said the non-profit wants to get as much money for the piano as possible, adding that "every penny will go into Slidell." She credits Bergeron and Gomez for turning a simple piano into a tremendous opportunity to help the community's veterans.

Gomez, who may be the only living artist whose work is signed by the remaining two members of the Beatles, is still processing it all. "I don't think I've actually grasped that," she said. "I think it'll hit me at the gala."

Tickets are still available for the gala, to be held Nov. 21 from 7:30 p.m. to 11:30 p.m. at the Northshore Harbor Center in Slidell. The event will feature more than 100 art pieces to be auctioned during the night.

A number of the auction items were created as part of the "ReStore Renaissance," a challenge to artists to create works using re-purposed or renewed items from the ReStore warehouse, located at 747 Old Spanish Trail in Slidell. The warehouse style store offers surplus building materials, appliances, furniture, reusable building materials, household items and more at a fraction of retail costs, with proceeds dedicated toward the construction of Habitat homes.

Sarah Bonnette is a freelance writer on Louisiana arts and culture. She may be reached at sgbonnette@gmail.com.