Behind The Song: “I'm The Greatest” by Ringo Starr, Written by John Lennon 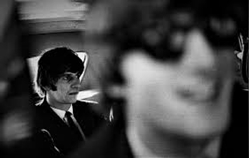 John Lennon wrote many of the great songs that Ringo recorded, including “With A Little Help from my Friends” and “Good Night,” recorded with The Beatles. Lennon also wrote “I’m The Greatest,” which Ringo recorded as the opening cut of his 1973 album Ringo. George Harrison played on the track along with Lennon, marking the only time all three Beatles played on a record together since their band broke up.
Ringo Starr, “I’m The Greatest”
“I couldn’t sing it!” said John. “But it was perfect for Ringo. He could sing ‘I’m A Loser’ to the world
but not ‘I’m The Greatest.‘

Lennon wrote the song in 1970, soon after The Beatles broke up. Inspired by the line spoken often by Muhammad Ali, he wrote “I’m The Greatest” as a joke. It’s quite like a Randy Newman song, musically and lyrically. But unlike Randy, who would sing songs told by the most untrustworthy narrators without compunction, Lennon felt differently. The man who sang “I’m A Loser” to the world, would not sing “I’m The Greatest.”