Body on the line for Beatles 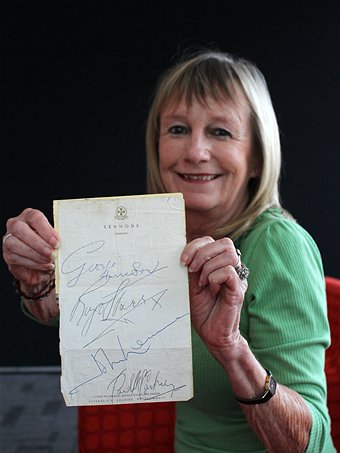 Paula grins as proudly holds up a creased A5 sized piece of paper scribbled with four signatures. It could be her most prized possession - and her most valuable set of autographs. And rightly so, she says, as she describes the lengths she went to, to get them.

"I think it was 1964, the Beatles were out here," she says, "and a group of us for school went out to Lennons to see if we could meet the Beatles."

The Beatles stayed at Lennon's Hotel on George Street; during their short time in Brisbane there were several attempts by teenagers to gain access to the Beatles' suite. Paula's attempt never made headlines, but she left with a special memento.

I love that story. One of your sidebar headings should be for stories people share describing their Beatle related story - how they acquired an autograph, met one or all, concert stories - whatever true story may be very interesting to read while we are listening. (Otherwise, they can email me their stories and I'll write an ebook),