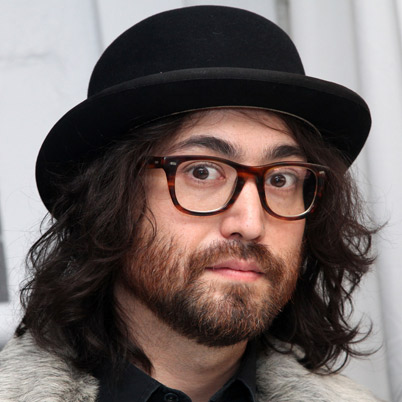 The Lips had previously shared their own, six-minute audio rendition of the song via frontman Wayne Coyne's Instagram, but, as with every Flaming Lips song, the visual element makes it so much better. On Letterman, Coyne wore a frilly silver coat and stood atop a road case, waving his arms like a born-again prophet, with ribbons colored with pastel pink and green lights flowed from him. Lennon, sporting the same hat and beard his dad wore on the album sleeve for Hey Jude, stood to Coyne's left and swayed as he sang of "cellophane flowers." When the chorus finally hit, so did the glitter, as thousands of tiny silver particles (diamonds?) rained over the musicians and Coyne's ribbon light show flashed its way into an epileptic's worst nightmare. By the time the group reached its final call-out to "the girl with kaleidoscope eyes," Lennon and Coyne pulled out their own psychedelic visual twist on the line. "That's all you need, right there," Letterman said at the conclusion of the performance. All week, the talk-show host has been offering up his stage – which just happens to be the same stage the Beatles played on 50 years ago for their first appearance in the U.S., on The Ed Sullivan Show – for artists to pay tribute to the Fab Four.