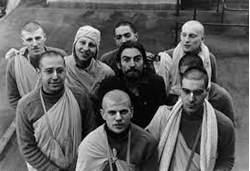 George Harrison believed in “self-realization,” not religion. Contrary to popular belief, George never truly belonged to any religious organization. He preferred to take aspects of all spirituality to help him connect with his true self. In the mid-1960s, George took LSD, which he said opened his mind to God-consciousness. He learned more about what that meant when he met his spiritual and musical guru, Ravi Shankar. Suddenly, spiritualism was more interesting to George than being a Beatle.

In Raja-Yoga by Swami Vivekananda, Geoge read, “All people possess innate and eternal perfection… You are that which you seek. There is nothing to do but realize it.” Eventually, George did. He also discovered his spiritual journey wasn’t about any one religion.

His parents raised him as a Catholic. However, as he learned more about Hinduism and the Hare Krishna movement, he realized he could never truly join them either. It was all about finding your true self and having self-realization.