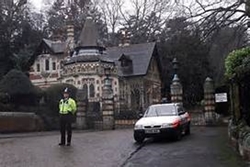 George Harrison was seriously injured after being stabbed multiple times by an intruder in his home, Friar Park near Henley-on-Thames, Oxfordshire.

Michael (Mick) Abram, a mentally ill man born in 1966 in Huyton, Liverpool, had scaled a perimeter wall and walked up the drive to the mock-Gothic mansion. Although security cameras were positioned by the main gates and the back entrance, the boundary fence in parts of the grounds was in a state of such disrepair that it was easy for an intruder to gain access.

At around 3.30am in the morning of 30 December 1999, Abram threw a statue of George and the Dragon through a window to gain access. Harrison's wife Olivia awoke first, initially thinking a chandelier had fallen before realising an intruder was in their house.