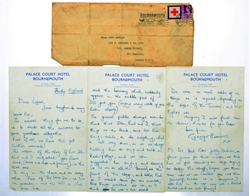 A car number plate once belonging to George Harrison that was first sold in return for free haircuts could fetch thousands of pounds when it is sold at auction.

The number plate KMT 499C was removed from an Aston Martin DB5 once owned by the late Beatle.

It is part of a collection of rare Harrison memorabilia being sold by Wiltshire-based auctioneers Gardiner Houlgate at its June specialist guitar and music sale.

Also included are a series of letters written by the guitarist, his sister and his sister-in-law.

The number plate is believed to have been taken off the car by a mechanic at Arnold G. Wilson Limited’s Regent Street dealership in Leeds in the early 1970s.

It was one of two plates being replaced with new style reflective plates while the car was being serviced.

The rear number plate remained at the dealership for several years until a member of staff sold it to a local barber, who collected car memorabilia, in return for free haircuts for life.