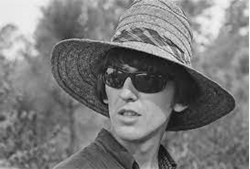 The Beatles will forever be known as musicians first. But in a 1965 interview that was aired on KRLA Beat, George Harrison said that he, John Lennon, Paul McCartney, and Ringo Starr actually preferred making films over touring. Over their time together as a band, The Beatles made five films: A Hard Day’s Night (1964), Help! (1965), Magical Mystery Tour (1967), Yellow Submarine (1968) and Let It Be (1970). Here’s what Harrison said about his acting career in ’65, while he was filming Help! in the Bahamas.

In his interview with David Hull and Derek Taylor, Harrison was asked to detail The Beatles’ current schedule, before the band’s next trip to America.

“I think in the meantime we’ll have a new record out, doing TV and things in England,” he said, as recorded in the book George Harrison on George Harrison. “And then with a bit of luck the film will probably be out around about that time. So then we’ll have the film songs out to plug and we’ll have a premiere. And then I think it’ll be the American trip. Or maybe the premiere will be after the American trip, which is in August.”