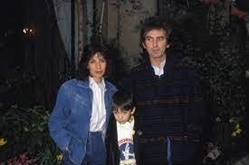 George Harrison named his son Dhani Harrison after two notes in the Indian music scale. Having a name representing George’s favorite thing, plus being the child of an ex-Beatle, sort of sealed Dhani’s fate of following in his father’s footsteps.

However, Dhani resisted going into the family business for most of his childhood and young adult life.

For Dhani, growing up at Friar Park was interesting, to say the least. He used to tell his friends that his dad “pushes buttons” for a living. He had no idea that those buttons were making hit albums.

“I hung out with my parents. I was always trying to be with the big kids, and the big kids at my house were like (ELO frontman) Jeff Lynne,” Dhani told Daily Mail. “You’d come home and it was like, ‘Bob Dylan’s here.’ It’s hard to get a bit of perspective on, like, ‘How did your school test go today?'”