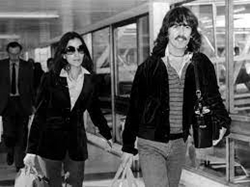 George Harrison‘s wife Olivia says she’s never considered herself a “Beatle wife.” When Olivia met George in the early 1970s, he hadn’t been a Beatle for years. He was a completely different person.

However, since George died in 2001, Olivia has taken her husband’s place in The Beatles’ affairs.
Technically speaking, Olivia is right. She has never been a Beatle wife in the literal sense. That role went to George’s first wife, Pattie Boyd. George met Boyd on the set of The Beatles’ A Hard Days’ Night in 1964. They married in 1966, but they had some pretty big bumps. Boyd got sick of George’s infidelities and left him for his friend Eric Clapton.