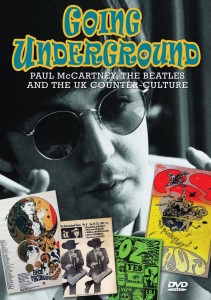 This documentary explores the evolution of the Beat Generation to the ʼ60s counterculture in England—an underground revolution sparked by LSD and led by Paul McCartney and the Beatles.

With innovative songs like “Tomorrow Never Knows” and “Strawberry Fields Forever,” McCartney is credited with exploring electronic sounds that helped take these cutting-edge concepts to the next level. Key players and scenesters of the time tell the story, including Barry Miles, editor of the International Times and a longtime friend of McCartney’s; John “Hoppy” Hopkins, founder ofInternational Times and organizer of the UFO Club (perhaps the British counterpart to the Avalon Ballroom); Joe Boyd, founder of the UFO Club and producer of Pink Floyd; and Soft Machine drummer Robert Wyatt, just to name a few. This revolution, led by a loose collective of young radicals who introduced new social, sexual and aesthetic perspectives, helped produce the most creative period the world has ever seen in popular music!