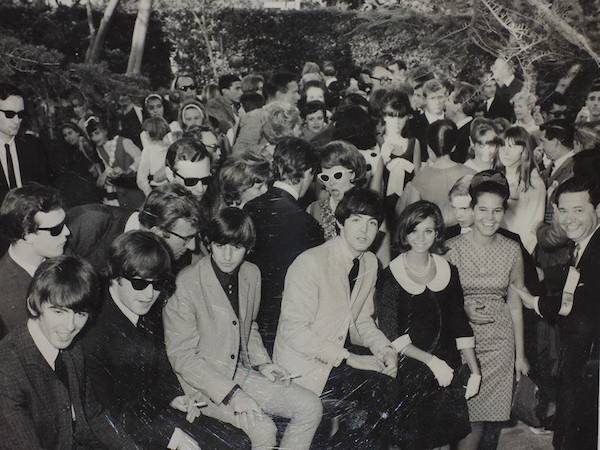 Photos and video of the charity fundraising party held in Brentwood during the Beatles first trip to Los Angeles in August 1964 have been slowly emerging. Now Alison Martino has posted perhaps the most fun picture yet, at her Vintage Los Angeles page on Facebook.

The photo is from her friend Bonnie Cowan Fleming, whose father Warren Cowan did the PR for the Beatles trip, Martino says. She named seventeen of the guests, including John, Paul, George and Ringo and members of the entourage such as Brian Epstein and Neil Espinall. There has been a lot of media electrons expended on Sunday night's 50th anniversary of the Beatles appearing for the first time on "The Ed Sullivan Show." I heard mixed reviews of the CBS special tonight — it didn't attract me, that's for sure. Couple of walks down memory lane to check out:

I don't know the month but it was the Summer of '64.  Does anyone know who gave this party?