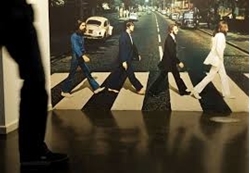 The album cover for The Beatles’ “Abbey Road” is one of the most iconic in music history. The 1969 cover art features the four members of the band crossing the London street, and while Ringo Starr, John Lennon and George Harrison are all wearing shoes, Paul McCartney is barefoot. Over the years, some whacky conspiracy theories have been posited to explain why the musician did not wear shoes in the shot.

Falling in line with another rumor that was gaining traction at the time — that McCartney had died some years earlier and had been replaced by a lookalike imposter — some believed that his lack of shoes in the photo symbolized a funeral procession. Lennon represented a clergyman in white, while Starr’s black clothes were that of a mourner. Harrison’s denim outfit made him the gravedigger.