How Beethoven and Yoko Ono Inspired the Beatles' 'Because' 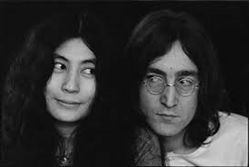 Ludwig van Beethoven is one of the most acclaimed musicians of all time. Yoko Ono is a touch less acclaimed. Despite the difference in perception of the two musicians, they both inspired one of the most intriguing Beatles compositions: “Because.”

Like many Beatles records, “Because” is is a bridge between the new and the old. The track’s appeal to contemporary audiences was rooted in its Beach Boys-style vocal harmonies and psychedelic lyrics. To appeal to an older generation, the song has a stiff, almost mathematical chord progression which recalls classical music.

The classical elements of “Because” were intentional. Snopes quotes John Lennon explaining the song’s origins: “[Yoko] trained as a classical musician. I didn’t know that until this morning. In college she majored in classical composition. Now we stimulate each other like crazy. This morning I wrote this song called ‘Because.’ Yoko was playing some classical bit, and I said ‘Play that backwards,’ and we had a tune.”