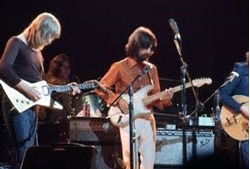 A matter of hours before one of the most feverishly anticipated rock concerts in recent memory is due to start, all the musicians taking part are sharing a room for the first time. The room happens to be Madison Square Garden, which tomorrow afternoon and evening will be filled, twice, with 20,000 people. Eric Clapton has just arrived from London looking like a wraith; somebody has been dispatched to find him some uncut heroin. Bob Dylan, meanwhile, is so terrified he’s ready to run.

As the instigator and organiser, George Harrison is in charge of crisis management. “The night before the show was a bit tricky,” the former Beatle later recalled. “We went down where they were setting it up. Eric was in a bad way... and [Dylan] stood on the stage and it suddenly was a whole frightening scenario. Bob turned to me and said, ‘Hey man, I don’t think I can make this. I’ve got a lot of things to do in New Jersey.’ I was so stressed, I said, ‘Look, don’t tell me about that. I’ve always been in a band, I’ve never stood out front, so I don’t want to know about that.’ I always just tried to be straight with him, and he responded. But right up until he came on stage I didn’t know if he was going to come.”