How Lennon and McCartney Wrote “She Loves You” 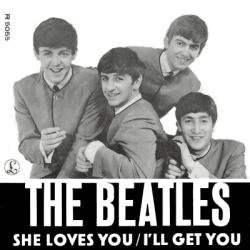 Excerpts from Ian MacDonald’s Revolution in the Head, a thrilling song-by-song history of the Beatles’ records that Slate’s Stephen Metcalf has called “one of the best, if not the best, work of pop culture criticism I’ve ever read.” MacDonald was a British music critic; he died in 2003.

50 years ago today, the Beatles recorded “She Loves You.” Below, MacDonald describes how they wrote and recorded the single, which he describes as “one of the most explosive pop records ever made.”

Lennon and McCartney wrote “She Loves You” in a Newcastle hotel room after a gig at the Majestic Ballroom on June 26, 1963. The initial idea (from McCartney) consisted of using the third person rather than their usual first and second.* To judge from the expressive link between the song’s words and melody, a roughed-out lyric must have come next, after which the pair presumably fell into the phrase-swapping mode familiar from “From Me to You.”