'I love you, Ringo': 56 years ago fans paid $2 to see the Beatles in Baltimore 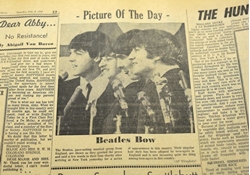 Fifty-six years ago, the Beatles tried to sneak into town. Their private jet landed in the dead of night in a bid to escape the crowds. It didn’t work. They were met by a mob of shrieking teens who chased after rock’s mop-haired darlings as they left Friendship Airport (now BWI Marshall) in a limousine, flanked by 22 police cars. A caravan of fans followed them downtown at speeds of up to 80 mph while leaning out their windows shouting those iconic lyrics from “She Loves You” (Yeah! Yeah! Yeah!).

On Sept. 13, 1964, as part of their first official North American tour, the Beatles played Baltimore. The city had seen nothing like it. The English rockers packed the Civic Center for two Sunday shows, drawing 13,000 convulsive fans for each performance. (That same afternoon the Orioles, who led the American League pennant race, drew 3,035 for a game at Memorial Stadium.)