'It was John who wanted a divorce': McCartney sets the record straight on Beatles split 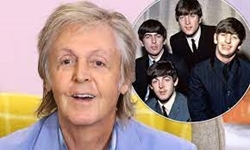 It remains the most analysed break-up in rock history: the one that set the template. When the Beatles split more than 50 years ago and Paul McCartney, John Lennon, George Harrison and Ringo Starr went their separate ways, it was McCartney who shouldered most of the blame.

But now McCartney is setting the record straight for good. “I didn’t instigate the split. That was our Johnny,” he has insisted in a candid and detailed interview to be broadcast later this month.

Recalling what he sees as the “most difficult period of my life”, McCartney, who celebrates his 80th birthday next summer, reveals he wanted the group to go on, especially as after just eight years together, they were still creating “pretty good stuff”. “Abbey Road, Let It Be, not bad,” he will argue in an upcoming episode of the new BBC Radio 4 interview series This Cultural Life. “This was my band, this was my job, this was my life, so I wanted it to continue.”