John Lennon and Paul McCartney Once Collaborated on an Unfinished Play 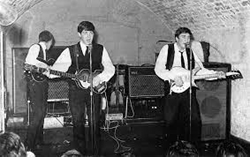 Whether together or in their solo careers, the members of The Beatles are best known for their work as songwriters. Given that their discography contains some of the most beloved and influential music made in the 20th century, that’s not at all surprising. But the band’s members also had some notable sidelines — George Harrison’s work in film production comes to mind, for one thing.

But The Beatles also had a literary side. Paul McCartney’s poems and lyrics have been published to much acclaim, while Lennon also made a few headways into the world of books. And it turns out that the two of them worked on a literary project together in their time before the Beatles — namely, a work for the stage.
A new article at Far Out has more details on this obscure (and, ultimately, uncompleted) venture, which McCartney discussed on an interview with the BBC program This Cultured Life. McCartney said that he recently discovered the manuscript at his home. “It’s quite a funny little thing,” he told host John Wilson. “It’s called Pilchard and it’s about the Messiah.”