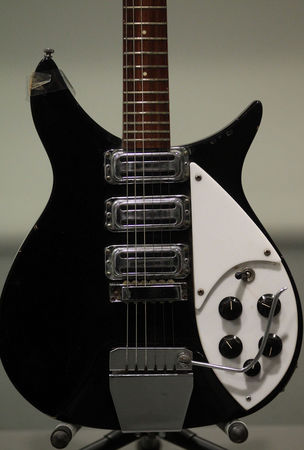 The British Invasion began 50 years ago on Friday, Feb. 7, 1964, when the Beatles landed at New York's Kennedy Airport. Two days later, on Sunday, Feb. 9, more than 70 million people watched as John, Paul, George and Ringo rocked the house – and the world – on "The Ed Sullivan Show"

As all musicians, the Beatles were armed with their instruments of choice: Ringo's Oyster Black Ludwig drum kit; George's Gretsch Country Gentleman; Paul's Hofner bass guitar with the strange neck-pocket guitar-strap setup; and, of course, John's black Rickenbacker. On Friday, to mark the 50-year anniversary of the Beatles' performance, The Rock and Roll Hall of Fame and Museum put Lennon's beloved guitar on display, on loan directly from Yoko Ono in New York, carried all the way to Cleveland by a dedicated Rock Hall curator. And then it was lovingly installed in a glass case at the Rock Hall. Stop by and take a look. You'll love it – yeah, yeah, yeah! And don't forget, this whole weekend is being dedicated to the Beatles, with Rock Hall programs and events galore. In case you wondered, the British Invasion isn't over yet!

What an awesome guitar,not to mention that John played it.Wow