Largest private collection of poems, doodles and drawings by John Lennon to fetch more than $800,000 when it goes under the hammer 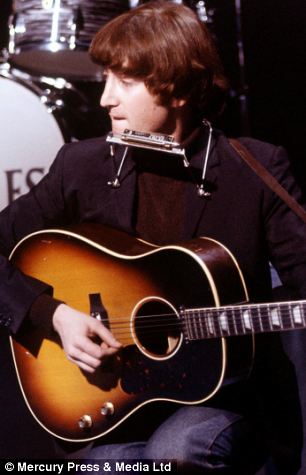 The largest private collection of John Lennon's artwork could fetch more than $800,000 (£500,000) at auction later this year. The works, featuring poems, doodles and drawings, were created by the Beatles legend and published in his two books, In His Own Write and A Spaniard In The Works. They will be put up for sale as 89 lots at the auction, which is taking place in New York on June 4.

The collection, titled, 'You Might Well Arsk', is owned by Tom Maschler, who published both of Lennon's books in 1964 and 1965 respectively. Mr Maschler, who also founded The Booker Prize, described the Liverpool-born singer's artworks as 'extraordinary'. 'Many are scrawled on the back of hotel notepaper, he said. 'I thought they were extraordinary and asked "who wrote these?" 'I was told "John Lennon" and soon after I met with John and suggested that he should produce John Lennon In His Own Write. 'I then had to inspire in him the confidence to write and produce the drawings.