My George Harrison Interview On The 12th Anniversary On His Passing 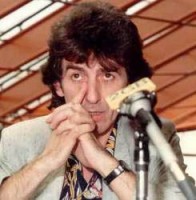 George Harrison didn’t write ‘Something’ for his former wife Patti,learn where to freeze frame Monty Python’s Life of Brian to see him and who ended up winning the My Sweet Lord case? George Harrison answered all of those questions when I takes to him in 1993.

The highlight of my media career was definitely having the chance to interview George. He was funny, informative and up for a chat. Today November 29 marks the 12th anniversary of the death of the one we all called `the Quiet Beatle`. Here is a candid chat with Beatle George. Paul Cashmere: I’m going to start off by talking about movies. I don’t know how many times I’ve see “Monty Python’s Life of Brian,” in which you have a cameo. I’ve searched for your part, even on freeze frame. The problem with that movie is that everyone in it looks like George Harrison. Put me out of my misery. Where are you in it? George Harrison: Well if you’re looking for me, then everybody’s going to look like that. There’s just one little shot, it’s probably about 12 frames. Do you know the scene where he comes out of the room and there’s crowds of people in the house and John Cleese is there saying,