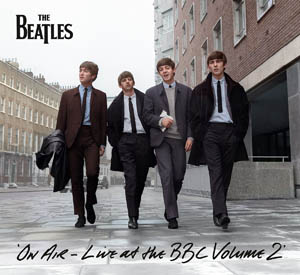 The Beatles archive collection On Air - Live at the BBC Volume 2 is just out. But there may be even more Fabs music in the vaults. “There are no plans at the moment,” says Kevin Howlett of Apple Corps. He tells Billboard , “I think these two albums [inc Volume 1] are wonderful from the point of view of presenting the real highlights of the Beatles' BBC sessions.”

The new BBC volume also contains a pair of songs The Beatles never recorded for release during their regular sessions for the E.M.I label - covers of Chuck Berry's “I’m Talking About You” and a revved-up version of the pop standard “Beautiful Dreamer.” You think The Beatles’ well must be dry by now? Maybe not. There are more Beatles archives being worked on, says Howlett. “There is something, but I don’t think we’re allowed to talk about it yet. If you’re involved in these Beatles projects, you have to be very discreet. It’s all top secret.”