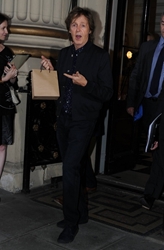 After the break-up of The Beatles in 1970, Paul forged ahead of the frontman of Wings, and apparently wanted to emulate his old group's on-screen success with films like A Hard Day's Night and Help!

An avid fan of the Star Trek TV series, the musician decided to hire its creator to write a science-fiction epic that would feature Wings as part of an intergalactic battle of the bands competition.

In a new book about the history of Star Trek, The Fifty Year Mission, serialised in The Hollywood Reporter, Gene's assistant Susan Sackett reveals, "Paul contacted him and was a Star Trek fan. He invited us to a concert, which was great, and we met backstage.

"Paul hired Gene to write a story about the band and it was a crazy story. Paul gave him an outline and Gene was supposed to do something with it. It was bands from outer space and they were having a competition."

At a loose end after the cancellation of the Star Trek TV series in 1969, Gene accepted the opportunity to turn the rocker's bizarre movie idea into a script. However, the possibility of returning to Star Trek scuppered the collaboration as Susan explains, "Gene was open to things at this point; Star Trek wasn't happening and he wasn't getting his scripts produced, but he had a family to feed.