Paul McCartney Returns to Los Angeles: Looking Back on The Beatles Local History 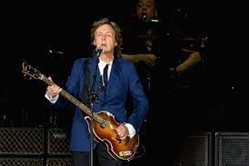 Fans are already planning their journey to SoFi Stadium in Inglewood on May 13 as Paul McCartney takes his Got Back tour to the home of the Super Bowl Champion Los Angeles Rams.

Nearly 60 years after The Beatles first album, Please Please Me, was released, McCartney, who turns 80 on June 18, is still going strong and filling packed stadiums and arenas. More than 70,000 people will crowd SoFi for the sold out concert on Friday. McCartney has been spotted twice recently in L.A., once on a double date with Ringo Starr and their wives and once hiking in the Hollywood Hills.
As McCartney performs in Los Angeles for the first time since his Dodger Stadium concert on July 13, 2019, Los Angeles magazine speaks with the authors of The Beatles in Los Angeles: Yesterday, Today, and Tomorrow, Jeremy Louwerse, and Tom Weitzel, about some of the most important local moments in Beatles history and some little known Beatles facts.