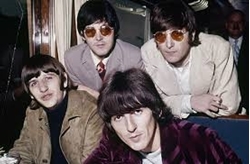 In the 1970 film Performance, a gangster on the lam named Chas (James Fox) has a hilarious encounter with Turner, a reclusive rock star played by Mick Jagger. “You’re a comical little geezer,” Chas tells Turner. “You’ll look funny when you’re 50.” The line gets funnier every year, and Paul McCartney probably laughs about it as hard as anyone.

Long before the music became “classic rock” and The Beatles made massive arena shows the norm, Paul and other musicians of the day couldn’t have imagined selling out packed American stadiums one night after the next. For starters, they didn’t know how long their fans would listen.

In late 1966, just after the Fab Four stopped touring, Paul checked in with The Beatles Book Monthly fanzine for a chat about the state of things. On the subject of touring, Paul sounded as if he agreed with Chas in Performance. He thought The Beatles would look silly if they were still flogging it on tour a decade later.