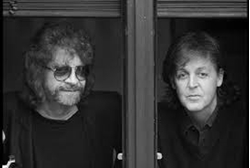 In 1960, John Lennon's art school friend Stu Sutcliffe coined the Beatles' name (originally, as Beatals) in tribute to Buddy Holly and the Crickets. By 1961, Lennon had grown tired of explaining the roots of the group's name, with its manifold permutations. In a humorous story for Mersey Beat, he famously claimed that the word had come to him "in a vision—a man appeared on a flaming pie and said unto them, 'from this day on you are Beatles with an A.'"

For his tenth solo album, Paul McCartney drew his title from Lennon's whimsical story, honoring his fallen mate and christening his most sentimental post-Beatles release in the same breath. This month, "Flaming Pie" enjoys deluxe treatment as the latest installment in the Paul McCartney Archive Collection, complete with a host of unreleased demos, bonus tracks, and outtakes.