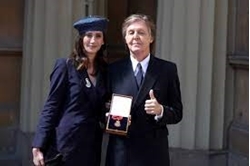 It took Paul McCartney a little while to find love again, but he’s found it in Nancy Shevell. The ex-Beatle has been married three times. First to the love of his life, and mother to three of his four children, Linda McCartney. They were bandmates and soulmates until she died in 1998 of breast cancer. Then, to Heather Mills from 2002 to 2008. Now, Shevell, whom Paul married in 2011, is the new Lady McCartney.

Shevell is different. When she met Paul, allegedly through her cousin Barabara Walters, she already had an impressive career and fortune all on her own, so marrying a billionaire rock star didn’t change much. The only challenging thing about being married to an ex-Beatle is having to face the spotlight.