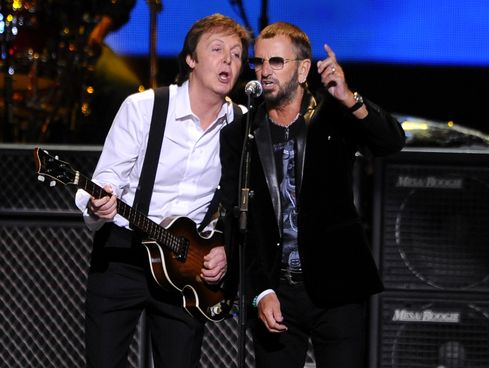 Less than 24 hours after the curtain falls on the Grammy Awards, organizers will be ushering music's brightest stars under the spotlight for another really big show.

The Night That Changed America: A Grammy Salute To The Beatles will be taped Monday night at the Los Angeles Convention Center for broadcast on Feb. 9 (CBS, 8 p.m. ET/PT), exactly 50 years after the band's first appearance on The Ed Sullivan Show. The Beatles LOVE Cirque du Soleil show in Las Vegas will go dark Sunday through Tuesday so the troupe can participate in the all-star concert, first in a rendition of Here Comes the Sun with Pharrell and Brad Paisley on vocals and then in the night's elaborate finale, expected to feature Ringo Starr and Paul McCartney performing together. The collaboration with Pharrell and Paisley marks the first time LOVE has performedHere Comes the Sun with artists singing and the first time the cast has performed the song outside The Mirage theater.