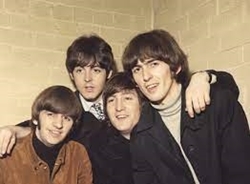 In 1980, Ringo Starr flew to New York after receiving the news that his former Beatles bandmate John Lennon had been murdered. Like the rest of The Beatles, Starr was stunned by the news and knew that Yoko Ono needed support. When he arrived, though, he wasn’t happy with the scene he found outside Lennon and Ono’s apartment building. Many Beatles fans had gathered there, and Starr said he was disgusted with their behavior.

The Beatles, Ringo Starr, Paul McCartney, John Lennon, and George Harrison, pose together in front of a white brick wall.
In 1980, Lennon and Ono were walking up to their apartment building in New York when a fan, Mark David Chapman, shot Lennon multiple times. Chapman had been waiting outside the building all day and had even had Lennon autograph an album that afternoon.